Matthew’s career in sport began as an athlete, representing Australia in swimming as an AIS scholarship holder. After graduating with a Bachelor of Sport Science degree from the University of New South Wales in 1996, Matthew decided to pursue a career as a coach.
Matthew’s coaching career began at Caringbah under the guidance of renowned surf coach Kevin Nielson. This experience allowed Matthew to expand his coaching skills, and he was subsequently offered the head coach position at Hurstville Aquatic Centre.
Matthew went on to work as head coach at Bexley Swimming Centre before taking a position as Director of Swimming / High Performance coach at Trinity Grammar School from 2002 to 2019. In his time at Trinity Grammar School he coached numerous athletes to win a total of 56 gold medals at Australian Age Championships. He led the Trinity team to win their first CAS Swimming Championship for the first time in 38 years and then led them to a record breaking 13 consecutive titles. In this time he was selected on the Australian team for the 2010 and 2012 world short course championship. Also in 2012 he toured the world on the Fina World Cup series to coach the 2012 FINA World Cup Male champion. In 2013 he was awarded the ASCTA Australian Age group Coach of the year. Also in this time Matthew was an integral part in the design, development and construction of a new swimming centre that included a state of the art indoor 50m pool and a refurbished 25m indoor pool. He was also a regular coach on numerous Australian and NSW teams that toured the world.

Matthew joins the SOPAC coaching team in 2020, driven to build this club into a top performing age and open age program.

Having coached high-performance athletes at Sydney Olympic Park since 2011, Adam Kable leads the Olympic Park Performance Hub's coaching team. He is a four-time consecutive winner of the NSW Swimming Coach of the Year award and has guided athletes onto each and every Australian swimming team, including the Olympic Games, World Championships, Pan Pacific Championships, Commonwealth Games, World Cup events, and more. In 2019 alone, the NSWIS coach guided one athlete to a world-record performance and a world championship gold and silver medal.

Adam’s philosophy involves connecting with each athlete as a person and developing an individual performance plan to help them achieve their goals. This plan combined with a strong squad culture built on ownership and accountability has driven the squad to be one of the best in the nation.

Adam holds an undergraduate degree in Physiotherapy and a Master of Education in Coach Education.

Ryan learnt how to swim at the age of 10 where he quickly developed to qualify for his first state age championships at the age of 12. In the years to follow he competed at state and national age and open level in the 400m and 1500m Freestyle, 200m Fly, 200m Breaststroke and 200m IM. In 2006, Ryan began teaching learn to swim and coaching mini squads, which he continued for the next 6 years. Ryan finished his own swimming career at age 19 and began studying PD/H/PE teaching at University. After 2 years out of the water, and missing competitive swimming, he made the decision to progress from learn to swim. Ryan became a competitive coach with his local swimming club to continue his passion of competitive swimming in a different capacity.

Ryan spent four years as assistant coach, during which time he trained swimmers from junior level squads through to junior and age state level competitors. His passion continued to grow for competitive swimming. After completing his Physical Education degree, Ryan made the decision to return to University and undertake a Sports and Exercise Science degree with the aim of becoming a high-performance coach. In 2016 he took on the role of national age head coach where he was able to apply his skills and knowledge and help swimmers achieve at a state and national age level.

Daniel has been a long time regular at Sydney Olympic Park, starting off his swimming career in the parents and babies’ classes, and later re-joining in the learn to swim levels. He quickly worked his way into squads at the age of 13, and soon after qualified for the State Championships in the 14 years 100 Breaststroke. Throughout the next year Daniel qualified for the 100m and 200m Breaststroke, the 100m Butterfly and the 200m IM at the State Age Championships.

Later in his career he attended his first National Championships in Brisbane in 2012 and continued to qualify for National Age and Open events until he retired from competitive swimming at 19. Daniel then went on to teach learn to swim for 5 years at Sydney Olympic Park, where he took a role as a mini squad coach, quickly progressing up to junior squad. He has worked his way up, over time, to be the State coach at Sydney Olympic Park. Daniel has completed a Bachelor of Arts/Bachelor of Teaching degree. 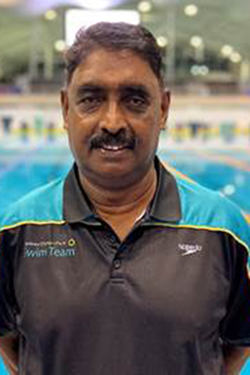 Pancha is a highly experienced coach who has been coaching successfully for over 30 years. In this time he has coached many State and National age champions. Pancha has also been the development coach of many outstanding swimmers  who have continued on to international competitions. He started coaching in Southern California in 1984 before moving to Riyadh to work in the British International school.

He has also been the lead coach of Junior State programs at SOPAC (formally SAC Seals) and MLC Marlins, when these clubs won the NSW junior state point scores. Pancha was also Head Coach of PLC School and guided the school team to 8 victories in the prestigious NSW independent  Girls’ Swimming association between 2006- 2017. He comes back to SOPAC with a passion to develop the next generation of outstanding swimmers.

Pancha is an avid fan of Cricket and Soccer, but he is most passionate about coaching swimming. 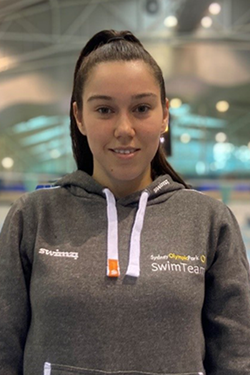 Transition Competition Squad Coaches
Alana began swimming at the age 4 and worked her way into mini squads by the age of 8. She began competing at age 13 and quickly became a butterfly specialist, making qualifying times for 100m and 200m butterfly at State Age Championships, as well as 5km open water State Age Championships. At age 18, Alana swapped racing for teaching and began her career in learn to swim where she taught a range of ages and levels, from children as young as 6 months, to kids starting in mini squads.

After teaching learn to swim for 5 years, Alana has ventured into the world of coaching competitive strokes. Alana has recently completed a Bachelor of Nutrition Science and Master of Public Health with Distinction at the University of Wollongong and has recently been accepted into the Master of Nutrition and Dietetics which will assist her in pursuing a career as a sports dietitian where she hopes to work with and assist young athletes.